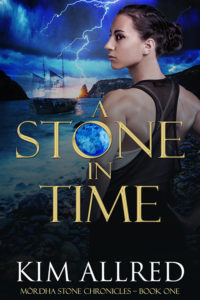 A mystery ship, an ancient stone necklace, and a journey that defies time.

AJ Moore climbed to the top of the rocky cliff, and panting hard, rolled over to stare at the gulls circling the sky. The quickening rush made her feel like her old self, like when the threads of a story were coming together. Well, almost like her old self. The person she’d been before her father’s untimely death. Once she found her reclusive muse, her career as a reporter would be back on track. The last pieces of her life puzzle falling back into place. If only it would be that easy.

When a two-hundred-year-old ship materializes through the fog, AJ sets out to unravel its mystery. Only to find her investigation hampered by the ship’s single passenger—the enigmatic sea captain.

Finn Murphy grows tired of his mission. He never imagined the journey in a foreign land would last so long, or that his only hope to return home relied on finding an elusive stone necklace. With his goal within reach, and barely staying one step ahead of an adversary, he can’t fathom how everything could go so wrong.

At the heart of it all—one woman stands in his way.

One simple news story will change AJ’s life forever and throw her into a journey that reshapes everything she thought she knew about herself. An adventure that will teach her that life isn’t about goals and career. It’s about family, loyalty, and trust. Finding love was purely accidental.

“Did something awful happen to the new owner?” AJ almost whispered it.

“A broken family, and a man lost to the sea, never finding home again.” Finn’s sharp laugh unsettled her. “I guess the story isn’t much different than the ones you’ve found with your old buildings. Perhaps the ship has something in common with them after all.”

AJ wondered why an old story, as sad as it must have been, would be of such interest to Finn after hundreds of years. While he laughed about it, he seemed to find no humor in it. She wanted to ask why it seemed to affect him, but for some reason she felt uncomfortable prying. She touched his arm, and realizing what she had done, pulled it back.

Finn looked at where she had touched him and his smile returned. “Your innocent questions have gotten me recalling long ago days and the harshness of life at sea. I think you’ll find that the history of old ships carry many a sad tale for the captains, as well as the sailors that worked them.”

Finn turned the tiller, and the boat shifted to starboard, leaning toward the water, forcing AJ to shift to the left to keep her body from leaning against him. “The Daphne Marie was built for a particular family, to provide transport to the continent, although it was also used for small cargo runs. The hold doesn’t carry much but it seemed to get the job done.”

“Do you remember the name of the second owner?”

AJ waited for him to continue but he didn’t. “And how did you come about owning it?”

Finn’s look became guarded. It should have been a simple answer. He ran his hand through his hair, kicked his foot against the hull. Then his grin returned. “You might say it was handed down through the family, an inheritance if you will.”

His simple answer made her more curious as to what he wasn’t saying, and why he was so careful about answering. Perhaps Finn thought that whatever bad luck had happened to the second owner was connected to his own story, haunting him through the years. Melodramatic, maybe, but something had him less than willing to discuss the Daphne Marie. AJ wanted to explore that avenue in more detail without putting him on the defensive. She rose, needing to pace, then remembered she was on a boat. She tried to sit when a gust of wind hit the boat.

Suddenly, the sailboat pitched to port, and AJ cursed at Finn’s untimely change of direction. She stumbled. Her arms reached out to grab something, anything, to catch her fall. All she saw was water, and the cold ocean waves reached up to engulf her.