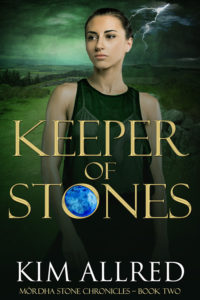 AJ Moore’s life has changed – drastically. And her lover, Captain Finn Murphy, refuses to explain how that happened. His only concern is to hand over an ancient necklace, and the stone within it, to his worst enemy, Beckworth. The fact the stone can return AJ to the only life she knows seems of no importance to him.

After Finn abandons AJ at Beckworth’s home, she soon discovers she’s not alone. Maire is a long suffering “guest” of Beckworth and becomes AJ’s only comfort. With only one direction to follow, AJ and Maire join together to follow the stone and learn its secrets.

But nothing can relieve AJ’s sense of betrayal from the one person she still craves to have by her side – Finn Murphy. Her refusal to consider anything but her way home endangers those closest to her. And AJ may never discover the fastest way home is with the one that chases her.

“There you are. I’ve searched everywhere for you.” Finn had changed from the hunting attire she’d seen him wearing in the courtyard that morning. He must have been soaked through from the misty drizzle outside. His damp hair had been pulled back, but an errant curl dropped across his forehead.

She almost reached out to push it back.

He sat next to her and searched her face. His expression masked something deeper than the concern in finding her.

“I’ve just been studying the artwork. The viscount has quite the collection of fine art.” The tension released from AJ’s shoulders when his light scent drifted to her. “You went hunting.”

“It’s a favorite sport of the viscount.”

AJ nodded. That made sense from what little she’d seen of the man. He’d certainly studied her as if she were prey last night. “Did you kill anything?”

“Somehow that makes me feel better.”

“I’m sorry for last night. Are you really feeling ill?”

Finn touched her wrap for a brief second. “You do catch on quickly. It must be your survival instincts. The women were a bit brutal.”

“Just tell me I’ll never see them again, and I’ll consider the whole thing more of a practice run.”

“No. I don’t think the viscount will be having them back for a while. He doesn’t appear to like them any more than you or I. He does it for the credits earned for being the polite host of the manor.” Finn’s tone hardened. “It’s all about appearances.”

“That’s surprising. I noticed a resemblance between Dame Ellingsworth and the viscount. It was in the eyes, I think.”

“Nothing more than a coincidence. I told you he wasn’t of noble birth.”

They turned silent as they gazed out the windows as if something outside would provide a better topic. She had so many things she wanted to ask him, but now that he was finally here, she savored the simpleness of his presence next to her. They’d grown comfortable with their silences, but as the tension left her body, she noticed Finn’s increase. His leg muscles tightened, and he sat upright, leaning away from her.

“So what aren’t you telling me?”

Finn shook his head. “What does that say that you know me so well?”

“In this case, I’m pretty sure it’s telling me I’m not going to be happy about whatever it is you’re not saying.”

Finn sighed as he leaned back against the divan. He reached out to grasp her hand but pulled it back.

AJ sat up to pour a cup of tea and, for the first time, noticed the second cup. She poured tea into both cups and administered the milk, doing anything to postpone what he’d come to tell her. It was going to be bad.

“I have to leave for a little while.”

She let the words wash over her. She wasn’t sure she’d heard him correctly. “You mean we have to leave.”

He reached out and gripped her hand which lay cold and limp. “No. Just me. Just for a little while.”

“I know. It’s one last mission for Beckworth, and then this chapter can be closed.”

“Will this mission get me closer to home?”

AJ heard the hesitation, the inability to commit. “Can you tell me what it is?”

“As safe as you leaving me here?”

He rubbed his fingers over AJ’s hands, as if this well-intentioned action was enough to warm them, but they remained stubbornly chilled. “I’ve worked it through a hundred different ways. This is the best course. You’ll be safer here.”

AJ nodded slowly and stared out the windows, the grayness piercing her heart. “You mean I’ll be safer here because you haven’t turned over the stones yet.”

“You’ve already turned them over. My only way home—gone. And now you’re just going to leave me here as you move on. Does that pretty much sum it up?” The panic threatening to roll over her and the fear that settled into her core rose into a molten rage. She fell into a spiral of white-hot anger that blinded her to her surroundings. That raging inferno heated every inch of her. Except her hands. She gazed down. Her hands were still covered by Finn’s, and she pulled them away. She rubbed them together, but they remained stone cold.

“We’ll get you home, AJ. We just have to be careful how we go about this. There are other things at play here.”

She turned on him. “Okay, so tell me. Break it all down for me so I’m seeing it with all the facts.”

He reached out to her again, but she shrank away from him. “I just need you to trust me. Just for a few days.”

“Trust you.” She spat the words back at him. “Do you remember the first time you asked me to trust you?” He blanched at her words. “Next thing I know, I’m two hundred years in the past with no way back.” She jumped up and stared down at him. Even through her anger, the hurt in his eyes registered with her. And something else. A conflict raged in him that he didn’t seem able to share. “All the secrecy. The meetings with Hensley, whatever little war you have with the viscount and you can’t seem to tell me any of it. All for my safety. I’m no further home than I was when I first arrived. I’m supposed to trust you, but the sentiment only works one way. Where’s the trust you have in me?”