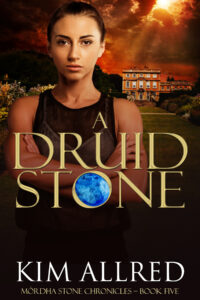 Loyalty, love, and betrayal …will it keep AJ and Finn together, or rip them apart?

A Druid Stone Description and Excerpt

AJ Moore falls through the fog, landing on a familiar knoll and stranded in the middle of a war between France and England. Her worst enemy lies injured at her feet, and her husband, the love of her life, Captain Finn Murphy, has been left behind – two hundred years in the future.
This was not the plan. But now that she’s here, she might as well complete the mission. Find Maire Murphy and discover what trouble she’s gotten them all into.
Finn Murphy thought he’d left his past behind, but his sister has gone missing. He watched in silence, unable to do anything, as his new bride was taken to the past by a man with no scruples. There’s no question he’ll follow. But how does one find someone in a time period when communique took weeks? And when the fog drops him in the middle of a rain-soaked field in France, his fears for AJ escalate.
Their only link—his sister Maire.
Reconnecting with family is only the beginning. The discovery of an ancient journal—a diary—which speaks of time travel, brings new and old enemies together. How can AJ or Finn consider returning to the future when the secrets of time travel leave their fate in peril?

The squawking of gulls broke through AJ’s slumber. The familiar cacophony lasted only a second, but it was enough to force her awake. Everything was dark, but she was too tired to pry her eyes open. Her head ached, but it no longer pounded.

She thought she’d heard Finn’s voice just before the gulls. He’d been carrying her. She remembered being jostled, then the stabbing pain until she didn’t remember anything at all.

Her stomach hurt when she breathed, but she couldn’t remember why it would. She moved a toe as she took an assessment of her body. Had it moved? She tried another toe and felt resistance. Not knowing what that meant, she moved on to her arms. They reminded her of fallen tree limbs, damp and heavy from winter rains. But other than the light twinge in her belly, her head seemed to be her primary malady.

Then she felt his lips. His warm voice washed over her but only a few words registered—pie, palm, wife. Finn. His cedar scent mixed with that of pine. Were they in a forest? Maybe she was delirious from brain damage.

Lips brushed against her forehead, her cheek, her lips.

She reached for him, but her arms wouldn’t move. Was that his hand? She was sure of it. Then the gulls returned. Where were they?

“Gulls,” was all she managed to say. She moaned, and something warm was placed on her forehead.

Her hair was brushed back, and a languid breath slid against her skin. His cedar scent invaded every cell of her being. It was Finn. Somehow, he’d found her.

“I know you’re strong. I know you could have done this on your own.” His lips nibbled at her ear as his hand stroked her shoulder. “But I will always come for you.”

“Finn?” His name scratched out of her dry throat like sandpaper across fine wood. She tried to open her eyes but couldn’t stop the deeper darkness that skirted her delicate consciousness. He squeezed her hand again and yelled something unintelligible. It didn’t matter. The only words she’d wanted to hear had already been said. He’d always come for her.