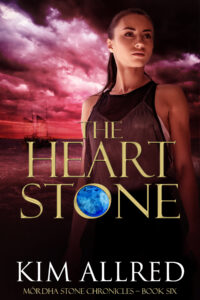 I will always come for you.

The Heart Stone Description and Excerpt

I’ll always come for you.

Finn Murphy would do anything to find his way to AJ Moore Murphy – if he could.

But the tables have turned, and AJ has a score to settle. With her husband missing, and their future at stake, she’s ready to walk into the fog in search of the only person who can make her whole again.

This time, there’s more at stake than finding one man. Their enemy has discovered the magic of the Heart Stone. And if AJ and Finn are to ever meet, they must ensure the Heart Stone ends up in the hands of the Keepers.

The only way to secure their future is to seek the help of the one person who everyone else believes betrayed them.

This time, AJ is no simple reporter or antique broker. She’s a warrior, determined to find her man.

“If someone was here, they’ve run to signal the alarm. We should get moving.” Maire pocketed her pistol and turned for the stables.

“Wait.” Ethan reached for her arm, but she grabbed his instead.

“We agreed to try for the stables. If someone was sounding an alarm, I think we’d still hear his screaming.” Maire sprinted away.

AJ shrugged at Ethan’s questioning glance before racing after Maire.

With his slight curse, mumbled loud enough for AJ to hear, Ethan brought up the rear. Maire darted from tree to tree when they reached the more open landscape of the estate. Breathing hard, AJ bumped next to Maire behind a small outbuilding. They had reached the western edge of the estate with both the manor house and, as Ethan had speculated, the rebuilt stables in view. They had arrived in darkness, as they’d hoped, but had no indication to the exact time.

“I don’t see any light in the manor, so it must be past midnight but not early enough for the kitchen staff.” Ethan edged in front of Maire.

“And the moon is nothing more than a sliver low on the horizon. Seems we’ve caught a bit of luck.” Maire began to move out, but Ethan stayed her arm.

“Me this time. Let me take care of anyone that might be in the stables.” And without waiting for an argument, he ran for the building.

When Maire rolled her eyes, AJ chuckled. “You have to let him do something,” she chided.

“There was a time I wouldn’t question his constant need to do everything. I don’t know if it was all those months being locked away or your influence. But it has become rather annoying waiting for a man to do what I can do for myself.”

“Yeah. I’m afraid that feeling will never go away.”

“How did you work through that with my brother? He’s as protective as Ethan.”

AJ smirked. “I’m still working on that. It helps to not always be storming into danger or running for our lives.”

Thirty minutes later, the back of the stable opened, and the shadow of a man led three saddled horses into the open. The women didn’t hesitate and, after a quick scan of the area, broke into a jog toward Ethan. AJ closed the stable doors as Maire mounted a horse. Ethan waited for AJ to mount before swinging onto the third horse.

Ethan forced them to maintain a slow pace as they walked the horses down the tree-lined drive away from Waverly.

When they were far enough away, AJ asked, “Was there anyone in the stables?”

He shook his head. “No. I’m beginning to wonder if there are any guards here at all. There were only six horses.”

“Maybe it wasn’t a good idea to take them.”

“Maybe. But if we’re discovered, I’d rather rely on a horse than nimble feet.”

The women hadn’t argued. After leaving Waverly, AJ had been tempted to check Eleanor’s farmhouse but decided it was too risky to investigate without daylight.

Dawn was on the horizon by the time they reached the edges of Corsham. They positioned themselves behind the old brick building where Beckworth had waited for her the previous times she’d entered the town. AJ waited until the sounds from town grew, suggesting it would be easier to enter unnoticed. Leaving her shoulder harness and horse behind, she practiced her hunched walk as she entered town. She kept her head down and stuck close to the buildings, hoping to eavesdrop where she could.

A high-pitched laugh woke her from her musings, and she stepped closer to the group of women. If there was something interesting happening in town, this was where she would hear it. Then she noticed Covington’s heated gaze as he followed her movements. He’d been the one who’d given her the cryptic message months before to stay away from town. At the time, AJ assumed he was trying to protect Eleanor. Had something changed since then? Did something happen to that dear woman, all because of them?

She would never get close enough to the women to hear anything of value with Covington watching her. After selecting a few items, she screwed up her courage and placed them on the counter. She kept her head down as Covington totaled the sum. She slid a few coins Ethan had given her across the counter, grabbed her packaged purchase, and remembered to hunch her shoulders on her way out. She felt the man’s eyes on her back until she cleared the door.

Holding her package close, she decided to return to Ethan and Maire. They could eat and regroup. She made it past the first alley and had planned on turning down the second one when a gruff hand wrapped around her waist, lifting her a few inches off the ground, while a hand covered her mouth. They were around the corner of a building and down the alley before she realized what was happening and began to struggle.

She kicked her legs and planted a solid hit to a knee. They went down. A man’s voice yelped a curse in her ear as they hit the hard ground. Unfortunately, she landed first, and it knocked the wind out of her. She pushed up, only needing enough space to reach a throwing dagger, but he was too heavy.

The man grunted when she elbowed him in the ribs. Her hand reached the dagger, but she froze at the man’s mumbled words.

“Beckworth?” AJ twisted so she could get a better look as her captor’s grip loosened.

They untangled themselves, and she dragged herself away, turning to sit, one hand still in her pocket.

Beckworth leaned against the building, or at least what she could recognize of him. He had a short beard, unruly and unkempt. His hair had grown long and was thick with dirt. He’d lost some weight from a previously slim frame, but when she caught his gaze, his cornflower-blue eyes sparkled with amusement.

“It took you bloody good time to return.”