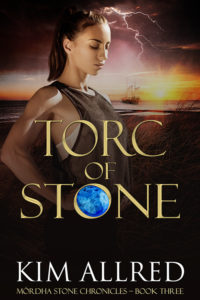 Only the secrets of the stones can open the portal to home. But can she leave her heart behind?

Torc of Stone Description and Excerpt

Against a formidable foe, AJ and her new team of friends, pursue a risky plan to steal the stones and the book that knows their secret. If successful, the mission prevents a madman from coming into unimaginable power, and fulfills AJ’s one wish.

Back in AJ’s hometown, her brother, Adam, and her best friend, Stella, join together in their investigation of her disappearance. Journals, lore and earrings made of stone lead the pair on a familiar trail – their only hope to find AJ.

With the knowledge she sought within her grasp, AJ must decide between the promise of the stones, or the force of Finn’s love.

A Torc of Stone excerpt...

“And I rescued you.”

“And why did I need saving in the first place?”

“It always comes back to that. Why can’t you ever be honest with me?” AJ dropped her fisted hands to her sides, and her face contorted in rage, but her eyes filled with unshed tears.

The truth was Finn didn’t know where to start. Should he begin with why he’d left her with Beckworth? Or with the mission to stop the duke? Maybe the simplest answer came down to why he’d brought her back with him.

Before he could make a decision, she turned away, but not before he glimpsed her falling tears. He dropped the brush and stepped toward her.

She ran through the stable, and he chased after her, catching her before she made it outside. He grabbed her arm, but she resisted, bringing her other arm around to slap him, but he caught that one too. He held on as she kicked, struggled, and cursed.

“Just give me a moment to explain.”

“Not until you calm down. What happened to being rational?”

“That ship sailed. I’m tired of being treated like a child.” She stopped struggling, her body falling limp. Finn wasn’t fooled by her new tactic.

He spun her in one movement to place her back against the wall, pinning her in place. Her body tensed, ready to run. His arms braced both sides of her, his body inches from her, cutting off any kicking.

Fire danced in her wide brown eyes, a touch of flashing amber filled with equal parts rage and fear. Not fear of him, but of her own fate. She wanted to go home. He understood the desire. Was that why he didn’t tell her everything? His actions meant nothing in protecting the mission, but everything to do with her.

He didn’t want her to leave.

His silence quieted her, and her body relaxed. Oh, how he missed her. Her banter, her complaining, her curiosity, her lips. He licked his own, and her eyes darkened. A connection bound them, that much he understood. The hunger in her gaze gave her thoughts away.

He bent down and moved his mouth over hers. Gently at first, but the warmth of her lips drew him in. He parted them, his tongue caressing. His body leaned against hers, their bodies melding together. She grasped his arms, and he pushed his tongue deeper. The touch scalding when her tongue searched in response.

He pulled her close, and the heat of their kiss urged him on. He cupped her chin and threaded his fingers into her dark tresses, bringing her closer still.

She reached for his neck, pulling him down, then moved against him, and their lips parted for a brief moment. Her tongue brushed his upper lip. He parted her lips once more, and his tongue ravished the sweetness.

She groaned as her grip tightened, and she returned his desire with equal measure. Her hands were everywhere, and he pushed them aside before grabbing her waist. One hand slid behind her and moved her from the wall, pressing her into him, letting her feel his full lust. She moaned, matching his own abandon. He reached for her skirt and pulled it up. She moved with him as her fingers grabbed at his shirt. They danced in a slow circle. He savored the moment, filled with her scent, her taste. He pulled her skirt higher.

Cool air brushed his cheek as her lips left his. The crack of a hard slap snapped him to full awareness.

She stepped back, her breathes ragged, and her expression filled with fury.

“You thought you’d just have a go with me here in the stable like some tramp? After all this time, you think you can just kiss away the bad?”

She brushed at her dress and placed her hands on her hips. What a sight she made, her hair mussed from his fingers, her pink cheeks flushing to red. But she couldn’t hide the glow of lust mingled with the anger in her eyes. She pointed a finger at him. “You haven’t been honest with me. You don’t trust me. You think I can’t handle it. Well, I’ve handled plenty. I’m tired of it.” She glared. “And some kiss isn’t going to make all that go away.” She turned and raced out of the stable.

Finn rubbed his cheek where she’d landed her slap. Still warm. He grinned. She still cared.